What does the global economy look like at the end of 2017?

The european economy zone continues their growth. The global economy und Europe had some turbulent years behind: The US-Housing Crisis which carried on into a global Debts- and Bank crisis, followed by the bankruptcy of Greece and the Euro-Crisis. Finally the are the negotiations about the Brexit on the agenda in Brussels. The economically und political developments let effected and observer confused, speechless and helpless behind. But how does the global economy and especially the european look like?

A review over the last eleven years shows the big crisis over the whole global economy. It starts 2006 with the US-mortgage crisis: To boost the US-Economy a lot of bank institutes gave inadequate secured housing credits over years to their costumers. Privat households had overindebt themselves and couldn´t pay their credit any more. In this connection the Bank itself came into financial troubles. All these thins together grow in the following years the to a global economy crisis. Banks became bankrupt, Companies had to be closed and declare insolvent. In 2009 the whole economy was kept by the world economy crisis and the european gross domestic product fall more than 4%. This leads to enormous troubles for many European countries: Greece was unable to pay their bills in spring 2010 without the support of the EU.
This vortex caches other EU countries very fast: Ireland, Portugal, Spain and Italy.
The consequences of this were hard austerity programs and a european rescue fond for all these overindebt countries. The european national economy run through very hart years, but in 2014 the Eurozone began to grow their economy situation. In 2015 some countries declared a economy growth up to 1,5 %.

Europe back on growth course

The european economy had shown herself as a robust economy during the time of several slumps. After these years of struggling almost all european countries could claim a positiv growth of their economy in 2017, countries reduced their budget deficits and generated a selfmade financial strength and left the european rescue fond. As an positiv effect of this the number oft jobless people could be reduced. For companies does this mean: Funds for investment and manpower were now free to use. The economy situation in Europe is now under the sign of  recovery.
Too many optimism will be to early at this point but the development is based on a high risk and unstable foundation. Besides these positive currency effects and low energy costs it is especially owed to the radical zero interest rate and the massiv bond purchases of the european central bank (ECB). With this it seems to be easy to restore deficit financial households. Instead of useing the opportunity to consolidate the budgets some countries like Italy or Span made a lot more debts. This was definitely not the intention of the european central bank as they tried to avoid the course of a “politic of cheap money”. This was originally intended to help weak european countries to restore their economy.
Due to the growing inflation rate there will be a interest turnaround. Economy specialists rate the chaotic negotiation about the Brexit as a high risk because this takes a lot of instability for investors with them. Despite of these troubles analysts assume Europe a positive economy development.

Is the crisis over?

Seen from the global point of few are the USA one of the most uncertainties. The International Monetary Fund (IMF) assumes that the United States will no longer be one of the economy machines oft the world over the next years. President Trump profits from the strong economy of his country at the moment. To gain and build trust in his doings was not very effective. The amount of jobless people in the US is with 4.1% very low and the consumer spending of US-Citizen is climbing. At the same time the encumbrance of private people rises dangerously. In the meantime more than 70% oft the US privat households are encumbered. The economy reformation which was promised during the election battle couldn´t be done until now. The same obtains to the tax reform. All hopes of the US-Economy are resting on deregulation, investing in infrastructure and a tax reform to boost the economy. The greatest concern prepares the slogan “America first”: Trump threatens with high duties on imported goods to protect the US industry. This will take effect on large export based countries like Germany. Their economy is aligned to export assignments. 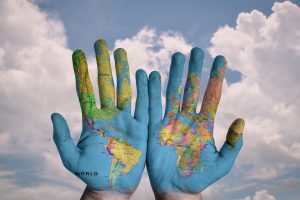 Despite of this the global economy seems to recover from the consequences of the 2008 crisis: The former economy areas Asia and Europe in growth position and have a growth rate of approximately 6,7% in China, 1,3% in Japan and 1.9% in the Euro zone. With this all these regions can play a important factor in the world economy. Chinas roll is especially interesting: Prime Minister Xi Jingping was elected to his second period and consolidates his power. In an over three hour speech he presents his agenda for the next years. In addition to his war against corruption in the country he will fight against the  wealth gap in China. Xi stands for opening the markets during the visit of US president Donald Trump in China.

The global economy can be rated as satisfying  , despite of a lot of political conflicts and uncertainties. The groth of Europe profits right now from a strong impulse of the IMF politic and a low salary. Companies benefit form low costs for Capital, Manpower and a constant order solution. The good numbers für growth and employment should not mystify over the uncertainties: The US-Politic is more the ever a big uncertainty factor and the Brexit negotiation are not finished in the moment.

Our quick conclusion about the global economy

Europe is on a good and stabil road to reestablish their financial power and the economical trust in the world. But we should have an eye on some conflicts around the globe. Just to name two of them: USA – North Korea and the Iran conflict.
All of them are able to fire the global economy and the growth back.
For us as a company does this mean to develop strong and sustainable business deals for our clients.